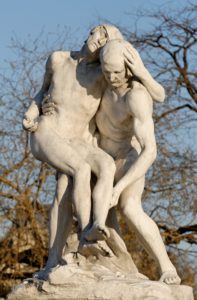 I blew past someone in the need the other day on the way to a church meeting.

They were on the side of the road with car trouble just ahead of me, obviously in distress, and I was running late. Sorry, no time to help. I didn’t think twice about leaving them stranded and un-helped, but I did make it to the church on time.

In his fascinating bestseller, The Tipping Point, Malcolm Gladwell writes about how social epidemics are created, developed and spread throughout societies. In a chapter on the power of context and culture to shape us and our behaviors, he focuses on a social experiment that two psychologists conducted at Princeton University based on the story of “The Good Samaritan” of Luke chapter ten.

In the experiment, a group of seminary students were asked to prepare a short talk on a biblical theme and then walk over to another building on campus to present it to a group of undergrads.  In between the two buildings the researches placed an actor dressed as a derelict, slumped down in an alley, coughing and groaning. They then watched to see if the seminary students would stop and help the man or not on the way to giving their theological presentations.

Before the experiment a questionnaire was given to the seminarians as to why they were studying theology. The researches assumed that if their motivation to enter ministry was to help others they would more likely to stop and help the man. One group of seminarians was given the parable of the Good Samaritan to present during their theological talk. Surely that group would stop and help the groaning man.

The researches were wrong on both counts. It didn’t really matter if the seminarians were presenting a talk on the Good Samaritan or whether they went into ministry primarily to help out humanity or not. The only thing that mattered is whether or not they were in a hurry. To one group of students the experimenters would casually say, “It will be a few minutes before they’re ready for you, but you might as well head over now.” To the other group they would look at their watches and say, “Oh, you’re late. They were expecting you a few minutes ago.”

Gladwell quotes from the experiment’s authors, John Darley and Daniel Batson: “It’s hard to think of a context in which norms concerning helping those in distress are more salient than for a person thinking about the Good Samaritan, and yet it did not significantly increase helping behavior. Indeed, on several occasions, a seminary student going to give his talk on the parable of the Good Samaritan literally stepped over the victim as he hurried on his way.”

What does this mean for us?  I think it means we have to slow down our frantic souls a few gears. The ticking sound of the clock in our eardrums easily squeezes out the “still, small voice” of God (I Kings 19:12), who gently points out little opportunities to bring His love to bear on the world around us. I feel like that so much of the time, rushing through my day just like those seminarians stepping over the derelict on their way to accomplishing ministry goals. Not just ironic but sad.

Lord, set our frantic souls to the rhythm of heaven. Open our ears to hear Your voice. Open our eyes to see the world with Your eyes of compassion.

Click Image for More on “Unearthing Heaven” and to Order:

Click Image for Reviews on “Growing Desperate” and to Order:

Click Image for Reviews on “Java Wake” and to Order:

Click Image for Reviews on “A Certain Risk” and to Order: